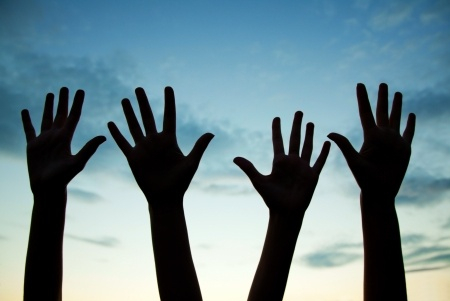 When I’m doing a 90-minute presentation, I don’t actually move into the close until I determine that the audience is ready to buy my program or service. (The close is the last part of your talk, where you present the benefits, features, and cost of what you’re selling that day.)

How in the world do I determine that the audience is ready to buy?

I test, which I’ll explain in a moment, and I also observe.

For instance, people in the audience taking notes is a very good sign. It means they’re really interested in what I’m saying.

Conversely, if people are sitting in the audience with their arms crossed, and there’s not a whole lot of response going on, I haven’t gotten through to them yet. So I actually need to change what I’m doing or I won’t get many sales.

Test Their Readiness to Buy
I actually test the audience’s interest and engagement throughout my speech.

Until the majority of the hands go up in response to that question, I keep going and transforming my talk.

This requires me to do a little thinking on my feet. I may bring in other stories or testimonials or whatever I think is necessary to show the audience why they need the information I have. I do that until most of the audience is raising their hands.

Then I know they’re ready for a “test close.”

I’ll ask, “How many of you think that this would benefit you? How many of you would really like to double your income in the next 30 to 60 days?” I raise my hand, and look at theirs.

If their hands aren’t up, they haven’t bought what I’m selling yet, and I’m not moving into the close until they do.

Now, obviously, if I’m on someone else’s stage, at a certain point, I have to close. I can’t be booted off the stage without closing. But, also, I can’t force or oversell the close.

The truth is, you don’t actually sell during the close. You sell prior to it. Think about it, if you haven’t sold them on the value of your program when you’re showing them in detail how it has transformed your and other people’s lives, you’re unlikely to sell them on it later.

However, once you have sold them on the value of what you’re offering, once there’s a sea of hands in that room, you can safely move into the close. You can be confident that there will be a clamor for the back of the room ~ and a very nice payday for you and your promoter ~ when you’re done.

David Neagle, The Million Dollar Income Acceleration Mentor and author of The Millions Within, teaches entrepreneurs and commission-based sales professionals how to quantum leap their current incomes past the 7-figure income level, often in less than 12 months. As a world-class speaker, sales trainer, and success-mindset mentor to some of the globe’s top CEOs, David also privately mentors big decision-makers in their pursuit of quantum success and peace of mind.
2 comments

Communication: As a team grows, it can become incr

Even during a recession, money is still present in

It is common to feel trapped or stuck in certain s

As a business owner, you have the power to shape t