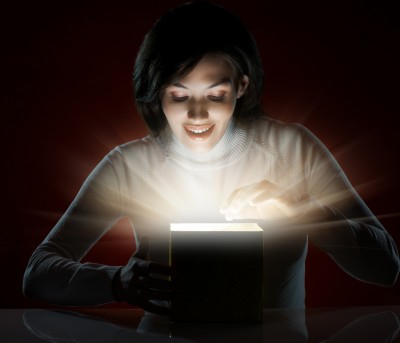 Whenever we have money problems, we tend to worry, struggle, tighten the purse strings and engage in other types of lack-inspired thinking and behaviors that actually push money away.

Not only does a mindset of lack push money away, but it also blocks ideas that would bring money in. It’s as though you have a little man in your head with a flyswatter, flicking away those pesky, expansive ideas from the Universe that don’t match what he believes.

Now imagine that you have a little magic box in your home that produces whatever you want, whenever you want it. Imagine how that would change how you think and feel.

Fear, worry and insecurity would fade, because you’d know that you could go to your magic box whenever you wanted something.

The truth is you have such a box. You can have any amount of money you want, whenever you want it.

The Law of Polarity states that if you have a need or a desire, the way to fulfill that desire has to exist in your life as well. You just have to reach out and grab it.

The money that you want, the thing you desire, is as close as your own breath. It doesn’t require great amounts of learning or strategy.

To earn that $10 million, you will definitely need a different way of making money than you have now, but the first step to that new way is in your life right now. And it may not take as long as you think to reach $10 million.

It will require a mental shift. You will have to put your faith in the Law of Polarity, and send the man with the flyswatter packing.

Then, brilliant money-making ideas will actually get through to you. You’ll take action on them and give yourself a new experience. Let’s be modest and say you double your income. Your subconscious won’t be able to deny that you doubled your income, and it will form a new belief that you can do that.

Armed with this new belief, you can ascend even faster, tripling, quintupling or increasing your income even more. My clients and students make massive leaps all the time.

That can begin for you today with your faith that life can be better, that the Law of Polarity is true.

So imagine that magic box in your home, apply what you learn in this series, and just watch what you can do!