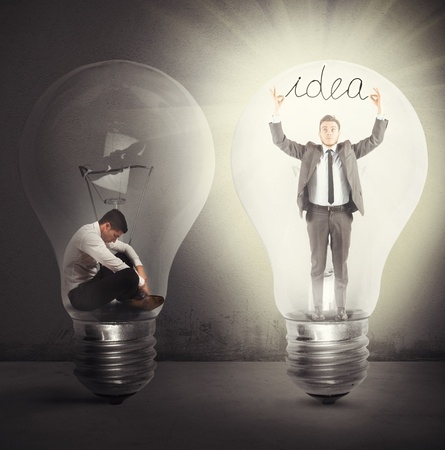 Strong words in that title, but how else would you describe the thoughts, beliefs and stories that undermine your efforts to have the life you want?

That’s why Step 1 of my Five Simple Steps to Unshakeable Self-Confidence is to root out these thoughts by finding the “I can’t, because…” messages that are operative for you.

Once you identify the limiting beliefs that are lodged in your subconscious, Step 2 tells you to replace them with a higher thought.

Choose to believe in an idea that is based in powerful Universal Truth.

Flip It
The simplest way to find that higher thought to believe in is to flip the I can’t, because message.

This is a two-part process:

2. And then you find a reason to put after “because” that is based in Universal Law.

The best Universal Law to employ on a regular basis is the Law of Polarity. This states that if you have an idea or desire the means of attaining that desire is already around you. In fact, you could not have an idea if it were impossible for you to manifest it.

“I can go to the conference because I am accomplished enough to benefit from it. Otherwise, I would never have had the desire to go. The idea never would have occurred to me.”

More Work to Do
Step 2 is a solid start, but you’re not done yet.

It’s very likely that the ways you think things should be done are also based in your old story.

So while you start telling yourself that you can make more money, and you realize, in fact, that some of the wealthiest people on the planet are creative, you still might not see the results you want.

Because the ways that you apply that new belief, the actions that you take, are still based in your erroneous thinking.

More on that, of course, next time.

Before starting a new program or business idea, yo

Happy Thanksgiving to all of our clients, partners

When it comes to taking advice, not all counsel is

On a day-to-day basis, we regularly have to make d