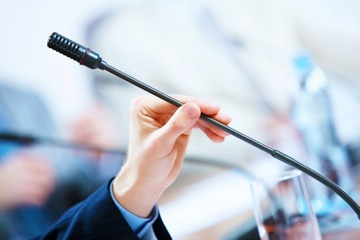 I told you before that you have to know your audience. A similar principle applies when you’re presenting at multi-speaker events. You need to know the other speakers as well.

When I’m speaking at a conference, I always ask for a list of the speakers, and also who’s on right before and after me.

If I don’t know those two presenters, in particular, I do research to find out these things:

What do they speak about? What are they selling in the back of the room? What are their price points? Are they going to contradict my work? Now, you could do your research and still not know exactly what the person before you is going to say ~ or there could be a last-minute change in the line-up.

That’s why it’s absolutely essential that you be in the room to hear at least the speaker who’s going on right before you.

Be in the Room
You need to know what the audience just heard and adjust your speech, if necessary.

Don’t change what you’re teaching, but if you’re going to tell the audience something contradictory to what they just heard, you want to acknowledge that to the audience, so they don’t sit there, confused and uncomfortable.

That can be as simple as saying, “The previous speaker has a different perspective on this, but in my twenty years of working with clients, I have found that…”

Or you might be following someone with an emotional story, and you want to be sensitive and skillful, particularly in your opening remarks.

For instance, a couple of years ago, I was speaking at a conference in Cancun, Mexico, that, due to airline problems, had to make last-minute changes in the line-up. One day, I ended up speaking after Dick and Rick Hoyt, the father and son team, who have competed as a unit in 1,000 marathons and Ironman competitions, Dick pushing his disabled son in specially designed wheelchairs.

When they finished speaking, there wasn’t a dry eye in the room, and no presenter would want to follow them. Getting up there and telling the audience that you’ve got the greatest thing since sliced bread just would not work.

I had to figure out how to transition from their story to mine and still look good.

Because I was in the room, listening to them, and reading the audience, I was able to come up with that thoughtful transition, and we ended up getting great sales that day. If I hadn’t been there to hear their story, I could have seemed insensitive or irrelevant, and our results would not have been nearly as good.

Be Prepared
The Boy Scout motto applies here. Because no matter what you set up prior to going into a speaking engagement, you can be sure they’re going to change something once you get there.

If you’re not prepared, that change could mean the death of what you’re doing.

On the other hand, a little preparation goes a long way toward ensuring that you come out looking like a star with a bucketload of sales to show for it.