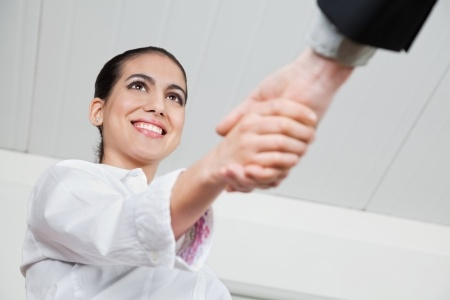 You could follow my 8 steps to the tee and still shoot yourself in the foot when it comes to sales, if you don’t also heed the advice I’m going to give you over the next several weeks.

You need to set yourself up for a prosperous close before you even touch a foot onstage. Again, “the close” is the time during your presentation when you specifically sell the program or service that will be available in the back of the room after your talk.

The Ideal Environment
The first thing you have to do is to create and control the close and sales environment, so that it’s conducive to selling your product or service.

That means you have to negotiate with your promoter or the person who invited you to speak to make sure that the following things are in your contract. Or, if there’s no contract, that you have a verbal agreement around the following:

1. Dedicated 15-minute break. There must be a break after you speak, where nothing else is happening but the opportunity to buy your product or service. To clarify that even further, I also put in my contract that I won’t speak before lunch or dinner, or before a raffle or a drawing.

You also don’t want to give your presentation after a cocktail hour. The last thing you want is a bunch of people in the room who have been drinking. I put that term in my contract too.

2. You will break the room. You should be the one to announce the break. You don’t want anyone else getting up there and breaking the momentum you just spent 90 minutes building.

You want to be the one to say, “We’re going to take a 15-minute break now. And I’ll be in the back of the room to answer your questions.”

Educating Promoters
Since you generally will have a 50/50 financial split with your promoters, they’re likely to be amenable to those terms, but sometimes you do have to educate them.

For instance, if they want you to be the last speaker before lunch, you could say, “Well, I could, but then they’re going to be more interested in going to lunch than in purchasing stuff in the back of the room. So, that literally could cost us 30% or 40% of the sales we would have earned. That means you could lose $20,000 or $30,000.” That will get the promoter’s attention. He or she will now be in favor of your doing whatever you say you need in order to get the sales.

Obviously, you’ll have more credibility and clout if you’re not pulling figures out of the air. They should be real and provable estimates.

You get those credible figures by knowing what your conversion ratio is and the correct way to calculate it. (Many speakers do it incorrectly.)

To learn how to do that calculation and get the clout you’ve actually earned ~ and deserve ~ catch my next article in two weeks.