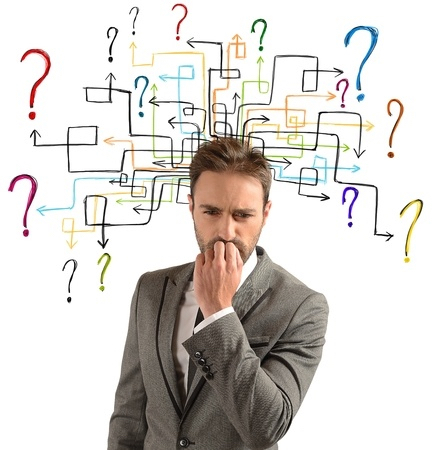 Did this happen to you?

Did you get stuck or confused as you tried to apply Steps 1 and 2?
(As you tried to determine the thought that keeps you from seeing the results you want, and then replace that thought with one based in Universal Law?)

If so, I encourage you to try again.

It’s almost certainly the case that you got stuck because weren’t working on the correct problem.

You see, most of us have layers and layers of stories we tell ourselves about ourselves, so it can be a real challenge to accurately identify the thought, belief or story that is the core of our difficulties.

In other words, your issue likely isn’t what you think it is.

Case Study: Fear of Sales Conversations
For instance, a student of mine had a lot of fear come up around sales conversations and thought the core problematic belief had to do with the outcome, so he might have created this Step 1:

I can’t do sales conversations because I’m afraid they won’t be successful.

While that might be true, it wasn’t the problem that was keeping him stuck.

The real issue was about his father.

He was a grown man, but he kept getting hooked into an old story that was triggering fear with other people. He had the secret hope and wish that his father would stop rejecting him and start accepting him.

Once he realized the right problem, he could then apply Steps 1 and 2 correctly:

Step One: I want to do sales conversations, but I can’t because I might be rejected, which triggers the rejection I felt from my father.

Step Two: I can do sales conversations because the outcome doesn’t matter to my self-esteem. Whether the person chooses to work with me or not, I accept myself. I am worthy just as I am.

Can you see the difference that would make?

Freed from his need to be accepted by the people he wants as clients, instead, he can show up powerfully and serve them.

A Common Problem
I used my student’s story, because it’s very common.

Many people desire approval more than money, but most people aren’t aware of that. They just struggle and don’t know why.

When you’re making sales, you’re putting yourself in the position of being rejected more than being accepted. That is a mathematical fact in business. More people say no than yes, and that goes for every business on the planet.

So you have to get to the point where you approve of yourself, and you are your own authority.

That’s what this series is all about.

So try again with Steps 1 and 2, and begin to kick your core problem to the curb.

And then with Step 3, next time, you can finally start seeing the results that you want in your life.

(Click here to find the earlier Step 1 and Step 2 articles.)